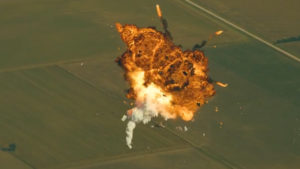 As part of our guest blog series, Michael Jastram kindly breaks down some of the particularities of SpaceX and how their approach to systems engineering differs from convention and contributes to their success. To explore all things systems engineering visit his website Systems Engineering Trends and read the original article here (in German).

SpaceX is currently hot news in the press: successfully completing the first manned space flight for the US since 2011, when the Dragon capsule brought two astronauts safely back to earth on August the 2nd.

As systems engineers, we are curious about how SpaceX approaches systems engineering. Michael Jastram’s article kindly answered these questions for us.
Founded in 2002, SpaceX has revolutionised the space market and despite its young age, the company has become the leader in satellite launches since 2017. Whilst this undoubtedly has a lot to do with the acute understanding of the market, the technology to accomplish this must also be fit for purpose. Space travel has pioneered systems engineering, some new ideas have finally come to be.

The philosophy of systems engineering

In the lecture “System Engineering: A Traditional Discipline in a Non-traditional Organization” PDF  SpaceX explains how the culture of their organisation makes this possible.

As is often the case in systems engineering, focusing on people is key. SpaceX cultivates an environment which prioritises clear values of reliability and safety.

So far so good, it would come as a surprise if other space companies didn’t want this sort of culture. However, whether they succeed in enforcing this culture is another matter…

SpaceX has a really interesting philosophy regarding product development. Whilst traditionally risk has been managed through excessive up-front analysis, SpaceX instead relies on rapid prototyping and iterative testing cycles. In the 21st century, we have the unique opportunity of being able to develop and test real systems in short development cycles. At SpaceX rigorous testing is carried out at all levels – including on the completed rocket right before launch.

The organisation must be able to support this type of approach. Systems engineering thinking is therefore taught and put in practice at all levels and in all departments of SpaceX. All departments must also deal with integration and take a holistic point of view.

Information management and handling are crucial, and SpaceX has forgone with traditional control boards and committees and is employing modern collaboration tools such as Jama instead.

This approach enables SpaceX to make detailed changes without compromising or affecting the robustness of the overall system.This may sometimes lead to drastic changes in the design; an example of such is shown below. 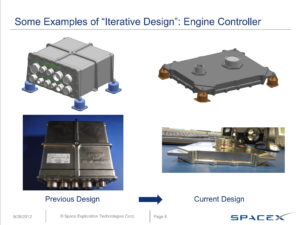 The V-model at SpaceX

SpaceX does not operate and breakdown in a traditional fashion. Instead, key design parameters are identified and tracked all the way down to the design level. For example, a classic parameter is the weight of the rocket.

This approach allows much more flexibility at the design level. This is also the method used by the Valispace tool (German version).

The topic of integration and integration testing becomes even more important with this approach. Thus investing in an appropriate testing infrastructure is strategically important. SpaceX tries to make the tests as realistic as possible (“test as you fly”). This leads to many hardware-in-the-loop tests at the component level. Wherever possible the software is also included in the test.

SpaceX also runs many tests that intentionally lead to component failure. This allows failure scenarios to be examined more realistically. Of course, all relevant tests are carried out repeatedly with every change.

Whilst this approach does lead to a spectacularly high number of SpaceX explosions on YouTube, be reassured that most of these occurred during testing. Indeed, so far, only four satellite launches have failed, out of a total of 86 missions…

How much organisation and structure in a company is necessary to develop and maintain complex and highly safety-critical systems, where life is at stake?

Not having enough creates huge problems – there is a reason that the complexity of an organisation is reflected in the complexity of the product. However, too much structure can also lead to a lack of agility and does not necessarily lead to more secure systems. This was unfortunately shown recently at Boeing with the 737 disaster (German).

Are you a student, teacher ou academic researcher? Contact-us directly