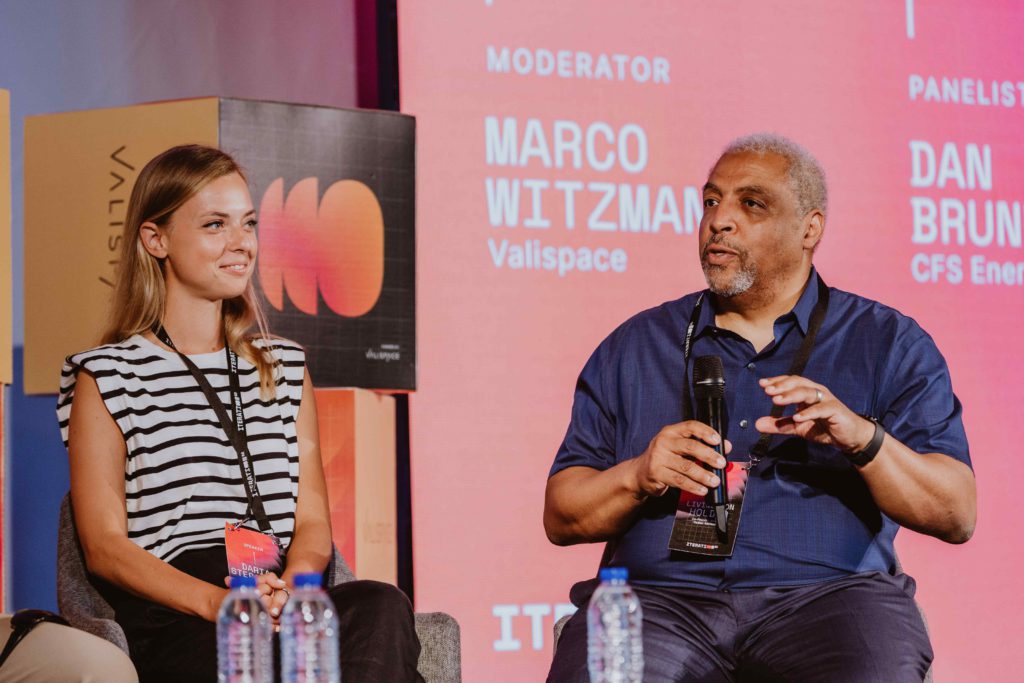 We are often told of the many engineering innovations that will be imminently developed and have the potential to secure both humanity’s future here on Earth and our ability to continue to explore the cosmos.

Whether it’s nuclear fusion reactors for limitless energy, making science in space more accessible with reusable orbital aerospace vehicles, or tackling pollution with plastic eating robot fish, the number of innovative projects and ideas show no sign of slowing down year on year (although some are more far-fetched than others).

So how do tech leaders and chief engineers in the engineering field think hardware development should evolve in order for these ambitious projects to be realised?

A panel was put together at Iteration22 to answer that very question. We heard the expert (and prophetic) opinions of:

From the panel discussion (you can find the whole video at the bottom of this article) emerged 5 clear ways in which hardware engineering should evolve over the next 10 years. Let’s find out what they were – in each of these sections you’ll find clips taken directly from the talk.

5 ways in which engineering should evolve in the next decade

Ah, AI. The much misperceived buzzword of the 2010s seems to have, at the start of this decade, moved from the theoretical to the practical – in the software industry at least.

A week barely seems to go by without news of how Artificial intelligence seems to be fundamentally changing the shape of creative industries – but what about in the hardware space?

Well, CFS’s Dan Brunner treats the topic with a mix of scepticism, in the ability to use AI in the field of nuclear fusion today, but with an optimistic nod towards its positive application for the future and push forward processing and understanding of data.

Radian Aerospace’s Livingston Holder shared his own cynicism of Artificial Intelligence being able to improve his own project today, interestingly pointing at a lack of human understanding of the physics problem to be able to properly inform AI models.

Livingston goes on to say though, that optimization of aerospace design will be furthered by AI, as long as it proceeds the judgement and knowledge of engineers and AI models.

Although there is often alarmist talk that Artificial Intelligence will eventually take the jobs of engineers, Valispace CEO Marco Witzmann offers a more pragmatic view that sees AI becoming just another tool in the engineers tool stack, rather than it doing the creative and thinking work for them.

Linked to the developments in AI are the technological advancements in computer hardware and the exponential leaps in computational power that will come with it.

Livingston here explains why he’s “really looking forward to this” and how it will lead to a greater output of engineering work, and in much less time.

Dan is also “super excited” about what improvements in computational power can do for his industry and the challenge of generating nuclear fusion. He thinks that the true magic in this field will happen when coupled with advances in material science.

Stepping slightly away from terra firma and into how improvements in computation will improve the machines we send into space, Daria Stepanova, the CTO of satellite builders German Orbital Systems, alludes to how this could improve satellite constellation management which could have untold communication and observational benefits for all that live on Earth.

One of the questions chosen by moderator Marco was inspired by participants of Iteration22 writing on an interactive board that they saw 3D printing as one of the things that could change hardware development in the next 10 years.

In contributing to this topic, Livingston saw limitations in its ability to add in a substantial way to the development of parts for aerospace today, especially when you consider the scale that’s needed alongside the rigorous safety standards that have to be met for every component that sits inside an aircraft.

However, this didn’t stop Livingston pontificating on the positives should 3D printing begin to work for the highly demanding environment of aerospace development.

Now the power of that [3D printing] is that it allows us to replicate those parts with high accuracy, high repeatability and at lower costs.
Livingston Holder – Co-Founder, Radian Aerospace

One of the things that has really driven the performance and user experience of software applications in the past decade has been an embrace of the open-source ideology.

In the Q&A session of this panel talk at Iteration22, an audience member asked whether the concept of ‘open-hardware’ could be embraced by hardware engineers and whether it could accelerate developments and innovation in the world of engineering.

Commonwealth Fusion Systems’ Dan Brunner gave the surprising answer that in fact, there is a whole section of CFS that’s dedicated to open innovation. Many in the audience perceived that the race to be the first to truly crack nuclear fusion would be one that was maintained by highly guarded secrets.

To learn that there is a version of collaboration and openness in this sector is surely one that benefits humanity as a whole.

Daria Stepanova told us that there is a burgeoning open community in the satellite industry that do share designs and have resources to download that small-sat operators can use in their own commercial projects.

She mentioned though that at the moment, this community is quite small. The question is, will this community grow in such a way in the next decade that can dramatically improve the designs we send to the cosmos?

Just like in the whole of the Iteration22 conference, much of the talk in this panel discussion reverted back to people, and the importance of organising engineers properly in order to take advantage of agile hardware development.

In terms of the talent that engineering companies need to attract to their operations, Dan Brunner talked about the need to look sideways across different industries to ensure a breadth of expertise.

We’re building a really high performance, cutting edge engineering system and aerospace is quite often the best place to get those types of people because they are also at the cutting edge.
Dan Brunner – Co-founder, Commonwealth Fusion Systems

Dan also went on to say that once you do hire these people, no matter from which industry, it’s really important to give them system ownership.

Continuing the theme of hiring, Livingston described the difference in what to look for when recruiting personnel between rigid enterprise environments and a more agile startup one (and being American, Livingston threw in a baseball analogy for good measure).

Throughout the panel discussion, some of the advice given from the panellists was to listen to the younger engineers in an organisation, as not only do they have a more accelerated ability to communicate, but they may be able to find shortcuts in providing good answers instead of running very complex models that take hours to run.

Following this theme of celebrating youth and looking to the future, the discussion ended with advice for students.

Livingston advised them to engage in conversations with more experienced engineers whilst reminding them that engineers, just like all of us in life, will always be student and always learning.

And Daria, as well as encouraging students to try different things, also told them to… embrace the power of YouTube!

Bonus content: An anecdote from Livingston Holder (and a reminder to trust your intuition)

In a discussion about simulations, the great story teller Livingston Holder, told us how simulations and computational analysis can give you a consummate understanding of the threshold of your design, but perhaps in some circumstances (especially when you are thousands of feet in the air and travelling at unforgiving speeds) it is always best to trust your own judgement and the intuition that comes from experience.

Watch the full panel discussion here: How should hardware engineering evolve in the next 10 years?

Wait! Before you leave…

Read what Daria had to say about tooling during the panel:

In terms of engineering and systems engineering, there are also quite many, many tools to collaborate to work together and make decisions together. Plus, there are cool tools that help to effectively work with remote teams. That helps us a lot to attract talent that is not present locally, in Germany or in Berlin, but still wants to help us building projects and services. And the third one is the communication related. So there are certain tools that help us to improve the knowledge transfer between different teams and within teams.
Daria Stepanova – CTO, German Orbital Systems

Did you know that Valispace is one of these ‘cool tools’ where not only does it help remote teams to work effectively and do concurrent engineering, but its automatic calculations and ease of use takes the stress out of engineering projects. Want to learn more? Click the button below and speak to our (very friendly) solutions engineers.

Why lead engineers, from aerospace to nuclear fusion scale-ups, met in Lisbon to share development secrets for a faster engineering future | Iteration22

Iteration22 - A conference for engineers, by engineers

How to: Break Down Requirements for Efficient Engineering in Complex Hardware Projects

ClearSpace is shaping sustainability beyond Earth, their engineers manage data in Valispace

Are you a student, teacher or academic researcher? Contact-us directly